The Mentoring Award was established to recognize those people in the Society working to encourage others to reach goals they may have otherwise not sought and to offer the rest of the membership an example of what they could be accomplishing by acting as mentors. With the understanding that mentoring may take many forms, the following eligibility categories have been established:‍

Bailey was an associate instructor for Hellier NDT and an instructor for the ASNT Center for Excellence from 2011 to 2018, and a former general manager/vice president for Structural Testing Systems Inc. (STS) located in Ronkonkoma, New York. She has been providing NDT services in the Northeast Region of the United States for the past 19 years for numerous defense/government contract agencies, airframe and engine manufacturers, and space system agencies.

Bailey’s NDT journey began in 1989 and expanded to 1997 during her years in the US Air Force (USAF). She joined the Air Force in 1989 and attended USAF NDT Technical Training School at Chanute Air Force Base in Chanute, Illinois. While at Chanute, she studied nondestructive inspection (NDI) and obtained Level II certifications in PT, MT, UT, RT, VT, eddy current, and spectrometric oil analysis. Between 1990 and 1997, she performed NDT on F-15 fighter jets, B-52 bombers, and KC-135 military aircraft and a variety of jet engines. She was deployed during 1990 and 1991 with her squadron’s F-15 aircraft to Saudi Arabia to fight in the Gulf War during the Desert Shield and Desert Storm military campaigns and was awarded many medals for her service as a Gulf War veteran. After serving eight years in the USAF as a noncommissioned officer and achieving the rank of staff sergeant, she received an honorable discharge from the USAF to pursue an NDT career in the civilian sector

In 1997, as a transition, Bailey accepted a position as NDT manager for Honeywell Wheels and Brakes in Houston, Texas, where she managed the NDT operations and processes of 20 NDT inspectors and achieved her first ASNT certification in MT. In 1999, she accepted a position with Gulfstream/General Dynamics’ NDT department in Dallas, Texas. There, she was introduced to the NDT business for corporate jets and was able to develop the skills she needed for her future in the corporate jet business. She remained there until late 2000. In 2000, Bailey went on to accept a partnership position with Structural Testing Systems Inc. (STS). With the hard work and help of her business partner, Mark Welter, Bailey has had the privilege of growing STS from a one-person shop to three full-time technicians, three part-time technicians, and administrative staff members, as well as the creation of satellite locations. She has the pleasure of providing Level III consultation and services to the FAA in Northeast locations and professional organizations such as the Professional Aviation Maintenance Association (PAMA), Westchester Aircraft Maintenance Association (WAMA), ASNT, ASTM, and Women in Aviation. Most importantly, she has had the pleasure of providing NDT services to many aircraft manufacturers, private jet owners, and flying clubs throughout the Northeast region.

During 27 years of NDT service, she has had the privilege to work with many great organizations and companies in the industry, such as NASA, SpaceX, Boeing, Sikorsky, Northrup Grumman, Gulfstream Aerospace/General Dynamics, Pratt & Whitney, Rolls-Royce, Allied Signal/Honeywell, GE Inspection Technologies, and Hellier NDT, to name just a few. She now owns her own NDT consulting business, TB3 NDT Consulting LLC, and provides Level III NDT services to assist companies in managing their NDT programs.

Bailey currently serves as ASNT’s Regional Director for Region 2 (since July 2019) and chair for the Metropolitan New York/Northern New Jersey Section since 2017. She was the recipient of the Advancement of Women in NDT Recognition from ASNT in 2016 and the Hellier NDT Award for Outstanding Level III Services and Technical Expertise in 2015. She was the first person to teach a Level III course at the ASNT Center for Excellence in Columbus, Ohio, as well as the first woman to teach an ASNT Level III course at the Center for Excellence.

2019 winner Richard H. Bossi is an internationally recognized expert in nondestructive evaluation (NDE). He retired from Boeing Research & Technology as the Senior Technical Fellow for Nondestructive Evaluation (NDE) and Materials Characterization in 2014. Bossi received his bachelor’s degree from Seattle University in 1971 and his Ph.D. from Oregon State University in 1977. He has over 45 years of experience in the NDE field working on research in support of the nuclear, petrochemical, and aerospace industries. Following graduate school, he spent one year at Centre d’Etudes Nucleaires in Grenoble, France, five years at Lawrence Livermore National Laboratory, and four years at Sigma Research before joining the Boeing Company’s physics staff in 1987. During his career he has worked on a variety of military and commercial programs applying NDE technologies for radiography, computed tomography, ultrasonics, electromagnetics, data fusion, material property and bond strength measurements. Following retirement, Bossi has been a consultant to Boeing on composites and bond inspection technology. He has been the author/co-author of numerous publications/presentations, book chapters, and patents in the NDE field. His publications include several volumes of ASNT’s Nondestructive Testing Handbook where he has been a contributor and technical editor. He is a Fellow and lifetime member of the American Society for Nondestructive Testing (ASNT). Bossi has served for many years as an Associate Technical Editor and Technical Editor for the ASNT journal, Materials Evaluation, and as the chair of the ASNT Handbook Development Committee.

2019 winner Kathy Ferguson is a materials engineer for the Boeing Company in Seattle, Washington. Ferguson joined Boeing in 2008, where her broad background in NDT, failure analysis, and materials selection allowed her to support multiple airplane programs including the F-22, 787, 737, 777X, and the 767 Tanker programs. She has been a role model and mentor to students and colleagues in the field of NDT for her entire career. Ferguson has received numerous technical achievement awards including a Boeing Meritorious Invention Award, and she currently holds five US patents in a variety of different technologies.

Ferguson has served continuously for nine years on the Board of Directors for the ASNT Pacific Northwest Section. She served as chair for two consecutive years from 2017–2019, ensuring that the section continued winning Gold recognition. During that time, she was honored for her years of mentoring women pursuing careers in NDT with the ASNT Advancement of Women in NDT Recognition in 2018. She has encouraged countless students with her message that NDT is the “Ultimate Superhero Career” because NDT experts save lives before catastrophes strike and make the world a safer place. She encourages every member to recognize the contributions that they have made in making the world a safer place, and to that end, she has nominated numerous Pacific Northwest Section members for recognitions, resulting in them winning the following ASNT awards: two Fellow awards, Lou DiValerio Technician of the Year Award, Robert C. McMaster Gold Medal Award, and two Mentoring Awards.

She launched a “Building Connections” initiative, which helps students to network with other ASNT members and advance their NDT careers. Ferguson mentors high school and college students by making STEM presentations about NDT and organizes student tours of aerospace companies in the Seattle area. She served on the 2013, 2015, 2017, and 2019 Program Committee for the ASNT NDT of Composites Conference.

Ferguson has been a role model to NDT students at Clover Park Technical College, many of whom she encouraged to join ASNT and later hold leadership positions on the Pacific Northwest Section board. She was part of the leadership team that created the PNWS David Hall Student College Scholarship Fund that encourages students to pursue careers in NDT. She also consistently serves on the Scholarship Committee, Radiation Safety Committee, NDT of Composites Planning Committee, and the annual PNWS Golf Tournament Committee, which provides funding for the scholarship fund.

Ferguson began her NDT career working for the Naval Aviation Depot in Jacksonville, Florida, after graduating with a degree in materials engineering from the University of Florida. While there, she mentored fleet and depot technicians in the appropriate techniques to use for inspecting airplanes for cracks and corrosion. She later joined a large chemical manufacturing plant in Pensacola, Florida, as the lead metallurgist, where she established an SNT-TC-1A based certification program for plant NDT inspectors. She also began Ferguson Consulting Services, which provided failure analysis support in litigation matters involving industrial and aircraft accidents.

Ferguson has spent her entire career mentoring students, technicians, and engineers in NDT and supporting the vision of ASNT. It is her goal to help others to build greater connections and form a more meaningful bond with ASNT.

2019 winner Salahuddin (Sal) Razi is a certified ASNT NDT Level III in the methods of MT, PT, and UT. He is a Lifetime member of ASNT and a member of the Chicago Section since 1979.

Razi began his career in NDT in 1975 at the Pittsburgh Testing Laboratory. He worked in several positions of increasing responsibility for General Electric in in the areas of nondestructive examination, quality control, and manufacturing engineering. He was the lead inventor on a robotic peening apparatus and holds a patent for this invention. He began consulting in 2009, and also joined the adjunct faculty at Moraine Valley Community College at this time.

2019 winner Ryan Spencer is a Ph.D. candidate under the advisement of Uday Vaidya at the University of Tennessee, Knoxville (UTK). He is actively involved studying advanced manufacturing of composites, additive manufacturing techniques, and performing NDE including ultrasonics, vibration analysis, and acoustic emission. His work is sponsored through the Institute for Advanced Composites Manufacturing Innovation and in collaboration with the Oak Ridge National Laboratory Manufacturing Demonstration Facility working closely with Ahmed A. Hassen.

Prior to UTK, Spencer received his B.S and M.S. from Southern Illinois University (SIU), where he was introduced to the field of NDE through Tsuchin Philip Chu’s NDE laboratory. He helped guide graduate and undergraduate students through their NDE research including ultrasonics, infrared thermography, and digital image correlation. Spencer was also the president of the SIU NDE Club, which organized multiple outreach events to inform the general public about the field of NDE.

Spencer has been a recipient of the ASNT Travel Grant for the past five years, presenting multiple research topics at ASNT research symposiums. He has also helped organize the ASNT student mixer events alongside with Shant Kenderian and Anish Poudel for the past five years. The student mixers allow the students attending the conference to have a comfortable and productive experience. Spencer hosts multiple gatherings to talk about ASNT operations, provide networking opportunities, and give guidance to students during their conference experience. Spencer extends his involvement in the Society by participating in the Program Committee, organizing future research symposiums. 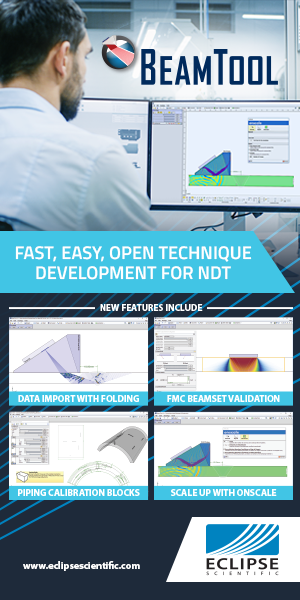